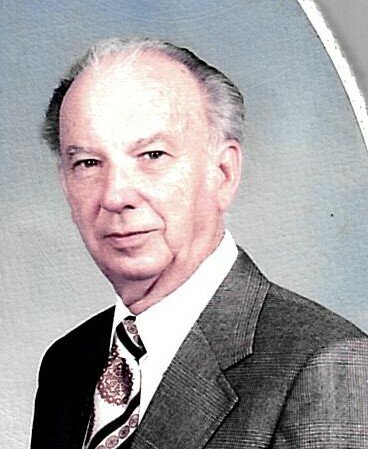 Please share a memory of Andrew to include in a keepsake book for family and friends.
View Tribute Book
Andrew (Andy) C. Schroeder, 99, of Carlinville passed away on January 15, 2023 at Carlinville Area Hospital. Andy was born on August 29, 1923 in Carlinville, the third child (only son) of Andrew J. Schroeder and Mary Anna Schmidt Schroeder. He attended the Carlinville schools and graduated from Carlinville High School with the class of 1941. After attending St. Louis Business College in St. Louis, he was employed by the Illinois Terminal Railroad Company in St. Louis, Alton and Springfield. In February 1943, Andy enlisted in the United States Army. After basic training with an anti-tank division at Camp Hood, Texas he was enrolled in the Army Specialized Training Program where he attended Northern State Teacher’s College in Aberdeen, South Dakota. Upon termination of the AST program, Andy joined the 66th Infantry Division which was sent to Europe in late 1944 to serve as reinforcements at the Battle of the Bulge. On Christmas Eve 1944, the 66th Division crossed the English Channel in two transport ships. The ship Andy was not on, the SS Leopoldville, was torpedoed and sunk by a German submarine, resulting in the deaths of 763 men. Because the 66th Division was left under strength, it was redirected from the Battle of the Bulge to the German submarine bases at Saint-Nazaire and Lorient, France, with the mission to engage and keep the battle-hardened German troops from breaking out. Andy received the Bronze Star with “V” device for valor in ground combat against the enemy on March 12, 1945, which is the fourth highest military decoration for valor and heroism in combat. When the war ended, Andy was stationed in Salzburg, Austria until he returned to the States in April 1946. Shortly after returning to Carlinville, Andy met Norma Moore at the Honey Bee on the square, and after a short courtship they were married on October 30, 1946 in Edwardsville, Illinois. After being employed by Macoupin Service Company as the Chief Accountant and Office Manager until 1948, he rejoined the Army and served four years with the Office of Comptroller, European Command, in Heidelberg, Germany. While stationed in Heidelberg, Andy attended classes at the University of Heidelberg and toured many of the European countries. Upon re-enlisting in 1952, Andy attended Army Finance School in Indianapolis, Indiana, where he received the highest grades ever made up to that time. After graduation, he was assigned to the Army Security Agency and sent to northeast Africa, where he was stationed in Asmara, Eritrea until his enlistment ended in 1955. Upon his return to Carlinville, he attended Washington University in St. Louis, where he received the Sidney S. Cohen award for excellency in Accounting and was inducted into the Sigma Gamma fraternity and received his Bachelor of Science in Business Administration in 1957. After graduating, he served as Treasurer of several manufacturing companies until his retirement in 1985. In his retirement, Andy enjoyed traveling with Norma, working in his yard, and spending time with his family. Andy was a member of the United Church of Christ where he had served as Secretary-Treasurer, a past member of the Lions Club where he served as Secretary-Treasurer, a 68 year member of the American Legion Guy Baird Post 554, where he worked with the weekly bingo crew for approximately ten years. He was also a member of the Macoupin County Farm Bureau for 75 years. Andy was preceded in death by his beloved wife of 74 years, Norma, his parents, and his sisters, Mary Schroeder and Dorothy Soutar. Andy is survived by his two sons, Drew (Connie) Schroeder of Carlinville, IL and Kurt (Jennifer) Schroeder of Shiloh, IL; two granddaughters, Stephanie Schroeder Duncan of Carlinville, IL and Kaitlin Schroeder of Millstadt, IL; grandson Dr. Andrew Schroeder of Memphis, TN; great-grandsons, Myles Duncan and William Speak of Carlinville, IL; step grandchildren, Courtney Boznos of Bloomington, IL and Christian Tieman of Troy, IL; step great grandchildren, Everleigh Boznos of Bloomington, IL and Chip Tieman of Troy, IL; two nephews, Mike Soutar of Palos Verdes, CA, and Jon Soutar of Barstow, CA, and his Morse Farm friend and companion, Fran Kay. Private funeral services will be held on Wednesday, February 1, 2023 at Davis-Anderson Funeral Home in Carlinville. Burial will follow at Mayfield Memorial Park Cemetery, Carlinville. Memorials may be made to American Legion Guy Baird Post 554. Davis-Anderson Funeral Home, Carlinville is in charge of arrangements. Online condolences can be given at www.davisandersonfuneralhome.com.
To send flowers to the family or plant a tree in memory of Andrew Schroeder, please visit Tribute Store
Wednesday
1
February

Share Your Memory of
Andrew
Upload Your Memory View All Memories
Be the first to upload a memory!
Share A Memory
Send Flowers
Plant a Tree