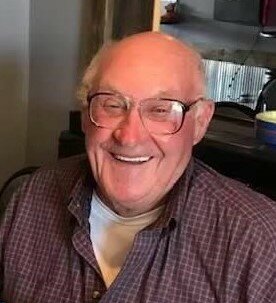 Please share a memory of Harold to include in a keepsake book for family and friends.
View Tribute Book
Harold L. "Hodge" Clark, 88, of Hettick, passed away Wednesday, January 18, 2023 at Hillsboro Rehabilitation and Health Care in Hillsboro, IL. Harold was born on April 9, 1934 to Clarence and Mayme (Mefford) Clark in Hettick, IL. Hodge was a 1952 graduate of Northwestern High School. In 1954, he joined the U S Army and served his country during the Korean War, and was with the field artillery division. After his two years were finished, he transferred to the Army Reserves. On December 5, 1953 Harold married Barbara Ann Fones in Carlinville. She preceded him in death on October 11, 2013. Hodge farmed and worked for Sonneborn Brothers in Hettick for over thirty years before retiring. He also worked at Allis-Chalmers in Springfield for a short while. Harold was the past Barr Township Supervisor and Treasurer for over twenty years. He also was a past member of the Hettick Fire Department. He loved gardening, mowing grass, and raising feeder calves. Harold is survived by his daughter, Brenda (Don) Loveless of Hettick, IL; son, Hal (Tammy) Clark of Geneseo, IL; 8 grandchildren; 14 great-grandchildren; sister, Karol Hazelwonder of Godfrey, IL; brother, Calvin (Patsy) Clark of Carlinville, IL; several nieces and nephews. Harold was preceded in death by his parents, Clarence and Mayme Clark, wife, Barbara Ann Clark, and brother, Howard Clark. Visitation will be held Saturday, January 21, 2023, from 11:00 am - 1:00 pm at Davis-Anderson Funeral Home, Carlinville, IL. Funeral services will follow at 1:00 pm at the Davis-Anderson Funeral Home, Carlinville, IL, with Rev. Tim Rhodus, officiating. Burial will take place in the Gilead Cemetery. Memorials are suggested to the Hettick Fire Department. Davis-Anderson Funeral Home in Carlinville is serving the Clark family. Online condolences can be given at www.davisandersonfuneralhome.com.
To send flowers to the family or plant a tree in memory of Harold Clark, please visit Tribute Store
Saturday
21
January