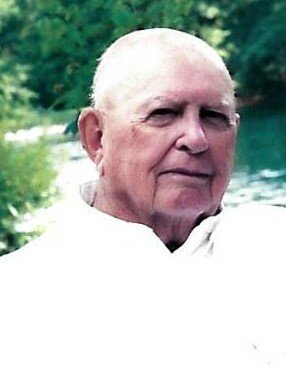 Please share a memory of Jim to include in a keepsake book for family and friends.
View Tribute Book
James (Jim) Willard Rives of Carlinville, IL, born August 2 1921 in Greenfield, IL, to George Jr. “Cotton” and Bernice (Cole) Rives. He married Anna Mae (Bellm) April 9, 1947 at St. Marys Catholic Church, Carlinville . They celebrated their 75th Wedding Anniversary April 9, 2022. Surviving are nine children: Patty (Richard) Lange, John (Charlotte) Rives, Bill (Karen) Rives, Matt Rives all of Carlinville. Mike (Olga) Rives of Carlyle, Bob (Deehan) Rives of Hillsboro, Jim (Eileen) Rives of Springfield, Mo. Margaret (Jan) Jansen of Florissent, Mo., Becky (Rusty) Klein of Oconomowoc, Wisconsin. There are 21 grandchildren, 35 great grandchildren, and one great-great grandson. One brother Earlom Rives of Canton Illinois and several nieces and nephews. James was preceded in death by his parents, a brother George Rives, a sister Eileen (Rives) Scott; one son Richard Rives, and one grandson Nathaniel James Florence. After graduation from Greenfield High School Jim entered Alexian Brothers School of Male Nursing Chicago, where he graduated as a Registered Nurse. He then went on to become a Registered Lab Technician and X-ray Technician. Jim enlisted into the US Army in November 1943. He served in the 8th Armored Division as a Technical Staff Sergeant, and served as a Medic taking care of wounded troops during WWII, then as a Clinic Director in the Occupation Forces for a year in Germany. Through his actions in the war he was granted the Bronze Star Metal. After his service to our country during WWII, he carried jobs in private duty nursing, nursing and Lab, and X-ray. Jim then took the job as Carlinville Area Hospital Administrator and retired from there in 1979, after holding the position for 25 years. Hobbies were hunting, fishing, playing cards, camping, traveling, reading (Westerns), telling war and life stories, and scratching off lottery tickets. Member of Ss Mary and Joseph Catholic Church, Knights of Columbus Council 663, American Legion Post #554 and the Rotary Club. Mass of Christian Burial for Jim will be Tuesday, January 3, 2023, 10:00am at Ss Mary and Joseph Catholic Church in Carlinville, IL with Rev. Joseph Koyickal Celebrant. Visitation will be held one hour before Mass, Tuesday, 9:00 to 10:00am, at the church. Memorials may be made to Carlinville Area Hospital Auxiliary and Ss Mary and Joseph Building Fund. To send flowers to the family or plant a tree in memory of Jim, please visit the Tribute Store. Davis-Anderson Funeral Home Carlinville is in charge of arrangements.
To plant a beautiful memorial tree in memory of Jim Rives, please visit our Tree Store

Look inside to read what others have shared
Family and friends are coming together online to create a special keepsake. Every memory left on the online obituary will be automatically included in this book.
View Tribute Book
Services for Jim Rives
There are no events scheduled. You can still show your support by planting a tree in memory of Jim Rives.
Plant a tree in memory of Jim

Share Your Memory of
Jim
Upload Your Memory View All Memories
Be the first to upload a memory!
Share A Memory
Plant a Tree