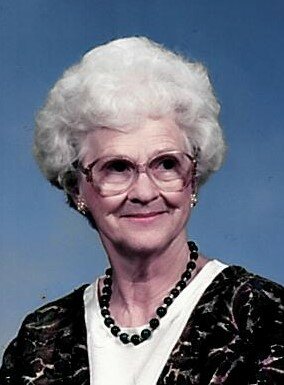 Please share a memory of Betty to include in a keepsake book for family and friends.
View Tribute Book
Betty Jean (Coatney) Rhoads, 95, passed away on Tuesday, March 8, 2022 at Carlinville Rehab and Health Care in Carlinville, IL. Betty was born on April 27, 1926 to Earl and Edith (Randell) Coatney in Alton, IL. She met Rocky at a Training Union Class he was teaching. They married in 1942 while Rocky was in the Army Air Corps during WWII. Baby Larry was born in 1944 but passed away at birth. Betty was a member and practicing Christian at Charity Baptist Church of rural Carlinville. She was blessed with a singing ability which she passed on to two of her daughters. Betty could not talk over a whisper at the nursing home she lived in but she would sing gospel songs very near her death. Betty would wake up in the night all her life and write down words to songs God gave her. She sang for funerals, revivals, and some Sunday mornings. Betty worked hard all her life. She and Rocky owned Town and Country Hardware Store and Rocky's Hardware in Carlinville. She also worked as a cook at the Carlinville High School. Betty also was quite a seamstress and made sure her three daughters wore the latest styles, even making all three prom dresses and wedding gowns. Her children were taught house keeping and cooking skills from a young age. Betty is survived by three daughters, Rayma Jean (Jim) Perkins of Arkansas, Terry Lynn (Rodney) Barnard of Chesterfield, IL, and Martha Sue "Marty" (Alex) Fones of Carlinville, IL; a son, Adrian L. (companion, Mary) of Greenville, IL; nine grandchildren, 21 great grandchildren and several great-great grandchildren; sister Dorothy Wassman of St. Louis, MO; brother Leone Leonard of Tennessee, and sister Mary Elizabeth Davis of Texas. Betty was preceded in death by her parents; husband Raymond F. "Rocky" Rhoads; son Larry Ray Rhoads at birth; six brothers; five sister; and one great grandson, Aaron Carr. So you can see quite the celebration in Heaven today with family and friends. Just imagine as she sees Jesus Himself and talks with Him and she realizes how much He loves her as He wipes away her tears tenderly. We thank and praise God for her earthly life and that we got to be with her. Someday we will see her again. Private graveside services will be held at a later date. Memorials may be made to Charity Baptist Church. Davis-Anderson Funeral Home, Carlinville is in charge of arrangements. www.davisandersonfuneralhome.com
To plant a beautiful memorial tree in memory of Betty Rhoads, please visit our Tree Store

Look inside to read what others have shared
Family and friends are coming together online to create a special keepsake. Every memory left on the online obituary will be automatically included in this book.
View Tribute Book
Services for Betty Rhoads
There are no events scheduled. You can still show your support by planting a tree in memory of Betty Rhoads.
Plant a tree in memory of Betty
Share A Memory
Plant a Tree