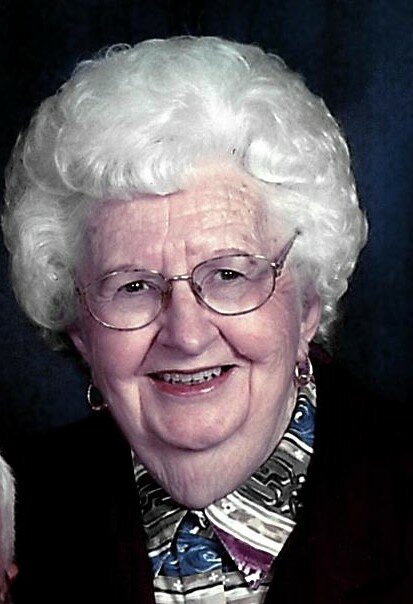 Please share a memory of Evelyn to include in a keepsake book for family and friends.
View Tribute Book
Evelyn Eileen Woods, 94, of Carlinville, passed away on Monday morning, February 7, 2022, at Heritage Health Care in Carlinville, IL. Evelyn was born on February 19, 1927 to W. Coy and Irene (Bloome) Anderson in Carlinville. She graduated from Carlinville High School with the class of 1944 where she was a cheerleader. On September 23, 1945 she married W. Meade Woods at Carlinville United Methodist Church. Meade preceded her in death on January 19, 2012. Evelyn was a homemaker and farm wife. She co-owned and operated Fun Fabrics and Things from 1971-2005 with her dear friend Faye Dwyer. Evelyn was a member of Carlinville United Methodist Church and the United Methodist Women. She was the leader of Lucky Birds 4-H Club. Evelyn also served with the Bird Unit of Home Extension, receiving her 50 year membership certificate several years ago. She was the former superintendent of the Macoupin County Fair and member of Town and Country. Evelyn and Meade enjoyed farm tours in many states. She enjoyed quilting, sewing, and playing cards where she belonged to several bridge and pinochle clubs. Evelyn was an excellent cook and baker and was well known for her cinnamon rolls. Evelyn is survived by her son, David (Suzy) Woods of Springfield, IL; daughter, Peggy (Tom) LeVora of Bloomington, IN; son, Keith (Ann) Woods of Carlinville, IL; six grandchildren, Ben (Kristin) Woods, Mark (Sarah) Woods, Matt (Jenny) LeVora, Sara (Mike) Johnson, Rachael (Rob) Macropoulos, and Adam (Leslie) Woods; 15 great grandchildren; one great-great granddaughter; sister-in-law, Mary Anderson of Altamont, IL, as well as several nieces and nephews. Along with her parents and husband, Evelyn was preceded in death by a son, Dennis Woods; daughter-in-law, Toni Woods; and three brothers, Leland, Eldon and Dean Anderson. Due to concerns over Covid, a private family service will be held at a later date. Evelyn will be buried next to her husband in Mayfield Memorial Park Cemetery, Carlinville. Memorials are suggested to the Macoupin County Fair or Carlinville Area Hospital. Davis-Anderson Funeral Home, Carlinville is in charge of arrangements.
To send flowers to the family or plant a tree in memory of Evelyn Woods, please visit Tribute Store
Tuesday
15
February