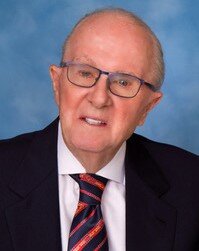 Please share a memory of Woody to include in a keepsake book for family and friends.
View Tribute Book
Ewell Elwood Long (1934-2022) passed away peacefully in the early morning hours of January 13, 2022. He was 87 years old. Woody, as he was known to his friends and family, lived a full life. He was born in Fayette, Missouri, and saw much of the United States, living and working in Missouri, Indiana, and Florida, calling Belleair, FL home for the last 25 years of his life. He found his first love in 1957 and married Viola Felton and was married until her passing in 1996. At the age of 62, he found love again, and in 2004, married his wife, Carol (Bankson) Keiser. Woody and Carol enjoyed their individual businesses, yet they were excellent partners and sounding boards for one another. Together, they enjoyed traveling, attending business conferences, and being connected to interested and interesting colleagues. Woody was the kind of man who saw people for who they were, not for the position they held. He enjoyed a good negotiation, and whether he was buying a parcel of property or a piece of equipment, hiring an employee, or driving a tough deal, he was always respected. Woody was liked by all and loved by many. He is preceded in death by his parents, Clarence Elwood Long, Flora Belle (Lewis) Long and wife, Viola Felton. He is survived in death by his wife, Carol, his twin sons, Michael (Kathy) and Peter (Cathy) Sullivan, son, Kenton (Marta), daughter, Lisa (Gary) Schoenhouse, stepsons, Christopher and Ryan Keiser, and stepdaughter, Angeline (Stephen) Johnson. He will be greatly missed by his 16 grandchildren and his 9 great-grandchildren. Woody is also survived by his sister, Sydney (Garland) Middendorf. Graveside Services for Woody will be held Friday. January 21, 2022 at 3:00pm. Visitation will also be on Friday before graveside services at Davis-Anderson Funeral Home from 2:00 to 3:00. Burial will be in Mayfield Memorial Park Cemetery, Carlinville, Illinois. Memorials in Woody's name are suggested to Loveless Park or ParkinsonsFoundation. Please visit www.davisandersonfuneralhome.com to leave condolences or light a candle in his memory. Davis-Anderson Funeral Home, Carlinville is in charge of arrangements.
To send flowers to the family or plant a tree in memory of Woody Long, please visit Tribute Store