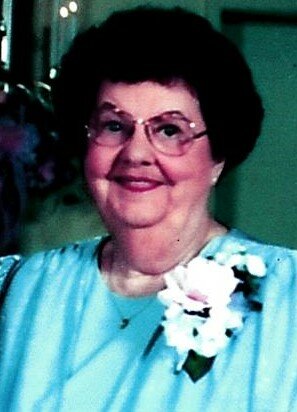 Please share a memory of Hilda to include in a keepsake book for family and friends.
View Tribute Book
Hilda Elizabeth Bettis, 92, beloved mother and grandmother was born into eternal life October 22, 2021. Born to Ralph and Evelyn (Nunes) Miller, Hilda graduated from Girard High School in May of 1946. She married Charles Eldon Bettis on June 2, 1946 in Girard, IL and he passed away May 10, 1994. Hilda and Eldon went on to have three children, Gary, Jeanette and Doug. When her youngest child went to school, Hilda went to work at the Prairie Glove Factory in Carlinville. She also worked at the General Telephone Company office in Virden, the State Bank of Girard and Sacred Heart Credit Union, until her retirement in 1993. Hilda was the choir director at the Girard Church of the Brethren where she was the organist for years. She volunteered as an organist and pianist for Pleasant Hill Village and Sunrise Manor Nursing Home. She was a member of the Nilwood Home Bureau until it disbanded and sang with the Sweet Adelines in Carlinville, Litchfield and Springfield. She was a valued benefactor to Pleasant Hill Village. Hilda loved to travel. She and Eldon enjoyed trips with Don Hickman, especially Hawaii, Alaska, Australia and New Zealand. After her retirement she would spend winters in Texas and Florida and camped in Colorado. Hilda is survived by her son, Gary Bettis and daughter Jeanette (John) Earley both of Girard; her four grandchildren: Angela (Carl) Try of Chatham, Jodie (Mikel) Sealey of West Jordan, Utah, JR (Brooke) Earley of Girard, and Stephanie (Kris) Neuman of New Berlin, 13 great grandchildren, brothers Jacob Edward (Barbara) Miller of Atlanta, GA, Henry (Karen) Sutton and Wendell (Joan)Sutton, both of Girard. She was preceded in death by her husband Eldon, son Douglas and siblings Glenn and Stanley Miller, Donna Thurber, Wanda Munro, Virgil and Wayne Sutton. Funeral services will be held Friday October 29, 2021, 10:00 A.M. at the Davis-Anderson Funeral Home at 226 North 3rd Street in Girard, IL. with Shawn Burgess officiating. Family and friends may call Thursday evening from 3:30 to 7:00 at the funeral home. Memorial may be made in her name to Prairie Land Ambulance or North Mac Public School Foundation. Davis-Anderson Funeral Home, Girard in charge of arrangements.
To plant a beautiful memorial tree in memory of Hilda Bettis, please visit our Tree Store

Look inside to read what others have shared
Family and friends are coming together online to create a special keepsake. Every memory left on the online obituary will be automatically included in this book.
View Tribute Book
Services for Hilda Bettis
There are no events scheduled. You can still show your support by planting a tree in memory of Hilda Bettis.
Plant a tree in memory of Hilda

Share Your Memory of
Hilda
Upload Your Memory View All Memories
Be the first to upload a memory!
Share A Memory
Plant a Tree