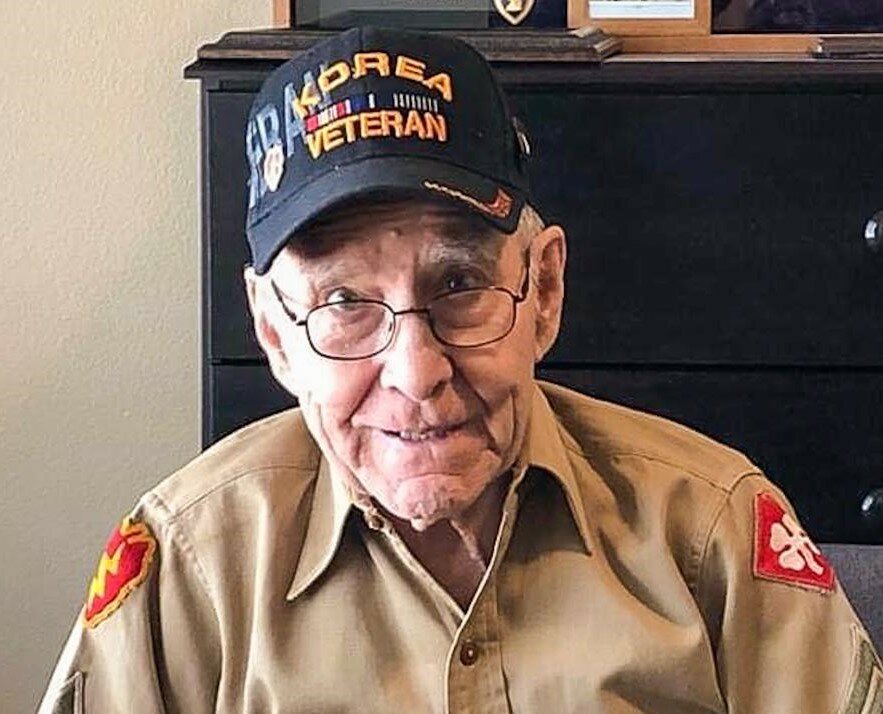 Please share a memory of Harold to include in a keepsake book for family and friends.
View Tribute Book
Harold C. Huston, 91, formerly of Rushville and Girard, Illinois, passed away Friday morning, October 15, 2021 at his residence in Chandler, AZ. He was born in Mt. Sterling, Illinois on December 29, 1929 to Irvin and Nelda (Traeger) Huston. He graduated from Rushville High School in 1947 and entered the US Army, serving with the 560th Field Artillery Battalion as a forward observer during the Korean War. The 3 years, 7 months, and 6 days he served in the military were the most defining years of his life; during that time, he was briefly reported as MIA, a story he enjoyed relating, and he received, among other awards, the Purple Heart. In 1952, upon his release from the military, he married June (Goldsborough) Huston, with whom he had three daughters: Beth, Colleen, and Teresa. Harold was employed by Bartlow Brothers (Korntop Meats) for over 22 years and retired from Peabody Coal Company in 1989. During his years in Rushville, he played softball and umpired for Little League. On July 3, 1992, he married Pearl (Sexton) Caudle, and they lived in Girard, Illinois and wintered in the Rio Grande Valley for fourteen years. She preceded him in death on June 12, 2019. While living in Girard and Virden, he served as president of both communities' Senior Citizens Centers and was an active lifetime member of the American Legion. Harold enjoyed keeping active even after retirement, driving a school bus for both Rushville and Girard schools, riding 1000 miles a year on his bicycle, gardening, playing pool, and walking. His family will remember with a smile his pride in wearing his Korean Veteran hat everywhere he went. Harold was preceded in death by his parents; brothers, Paul, Dorus, Gerald, and Donald Huston; and his sister Mae Egbert. He is survived by his three daughters, Marie Beth (Dan) Oakley, of Littleton, CO; Colleen (Jim) Warren of Marion, IN; and Teresa (Larry) Boyd of Queen Creek, AZ; eight grandchildren, Andy (Callie) Brehm, Amy (Curtis) Laabs, Spencer (Stephanie) Owen, Curtis Owen, Kelsey (Nathan) Mitchener, Nathanael (Courtney) Warren, Faith Warren, and Caitlyn (Adam) Koeberlein; 7 great-grandchildren; and several step-children, step-grandchildren, and step-great grandchildren. Visitation will be held Saturday, October 23, from 5:00 until 7:00 pm at the Davis-Anderson Funeral Home in Girard. Funeral services will be held Sunday, October 24, at 2:00 pm at the funeral home, with Rev. Ken Lovely officiating. Burial will follow at the Bethel Ridge Cemetery in Atwater, IL, with military rites. Memorials are suggested to the American Legion. Davis-Anderson Funeral Home is in charge of arrangements..
To send flowers to the family or plant a tree in memory of Harold Huston, please visit Tribute Store
Saturday
23
October

Share Your Memory of
Harold
Upload Your Memory View All Memories
Be the first to upload a memory!
Share A Memory
Send Flowers
Plant a Tree