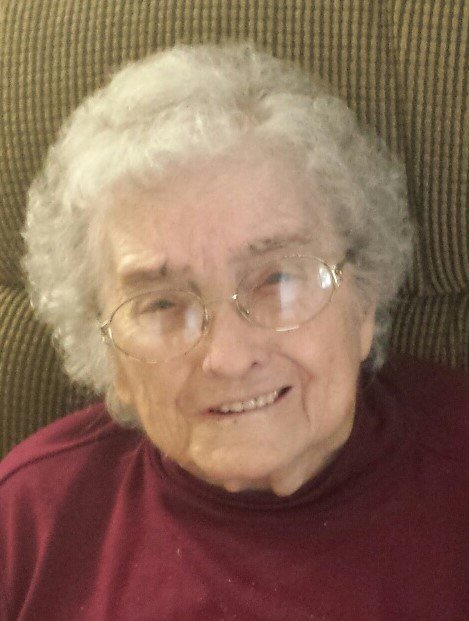 Please share a memory of Virginia to include in a keepsake book for family and friends.
View Tribute Book
Virginia Irene Banister, 95, of Carlinville, formerly of Lincoln, IL, passed away on Tuesday morning, January 12, 2021 at Carlinville Rehab and Health Care in Carlinville, IL. Virginia was born on December 11, 1925 to Dallas and Adeline (Wilson) Bristow in Atlanta, IL. She graduated from Atlanta High School in Atlanta, IL. Virginia married Vernon Leo "Bo" Banister on June 29, 1945 in Logan County, IL. He preceded her in death on December 15, 2005. Virginia was a homemaker, raising a son and taking care of all the household needs of her family. She was a member of Sweetwater Church of Christ and later the Church of the Nazarene in Lincoln, IL. Virginia enjoyed spending time crafting, cooking for her family, friends and church, as well as sewing and going to garage sales. Virginia is survived by her son, Dallas Banister of Girard, IL; two grandchildren, Jeff (Sandy) Banister of Carlinville, IL, Lisa (Darren) Schmedeke of Carlinville, IL and four great grandchildren. Virginia was preceded in death by her parents; husband; daughter at birth, Donna Irene; five brothers, Ansel, Eldon, Ralph, Julius and Mick, and three sisters, Reva, Iris and Lois. Memorial Services will be held at a later date. Burial will take place in Irish Grove Cemetery, Middletown, IL. Memorials are suggested to the donor's charity of choice in Virginia's memory. Davis-Anderson Funeral Home, Carlinville is in charge of arrangements.
To plant a beautiful memorial tree in memory of Virginia Banister, please visit our Tree Store

Look inside to read what others have shared
Family and friends are coming together online to create a special keepsake. Every memory left on the online obituary will be automatically included in this book.
View Tribute Book
Services for Virginia Banister
There are no events scheduled. You can still show your support by planting a tree in memory of Virginia Banister.
Plant a tree in memory of Virginia
Share A Memory
Plant a Tree