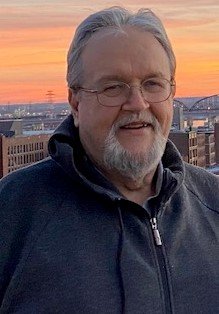 Terrance “Terry” William Rathgeber found peace on April 21. Terry was born July 24, 1948 in Alton, Illinois to parents William “Bill” and Vivian (Boker) Rathgeber who named him after St Louis CARDINAL great Terry Moore. Terry is survived by his wife of over fifty years, Judy (Whitby) Rathgeber who he met at Carlinville Community High School. Additionally, he is survived by his sister, Linda (Marty) Baker of Mabelvale, Arkansas; in-laws Janet (Whitby) Feldman and Tom Feldman of Scottsdale, Arizona, Julie Whitby Koller and Orion Koller-Faloon of Belleville, Illinois; and four nephews. Terry spent his childhood on the family farm until he attended the University of Illinois and received a Bachelor’s of Science in Agricultural Communications. His lifelong appreciation for agriculture grew into a hobby as he became a Master Gardener and Master Naturalist later in life. Terry also received a Master’s in journalism at Illinois which further developed his knack for storytelling. He was a member of the Illinois National Guard prior to a thirty-year career at the University of Illinois where he led fundraising for the College of Veterinary Medicine as the Associate Dean for Advancement. Upon retirement Terry lent his time and expertise to mentoring new fundraisers in the College of Engineering at Illinois, and to many local organizations including the Crisis Nursery, Cunningham Children’s Home, and the Champaign County Forest Preserve as they developed the rail trail. Terry’s generosity of time and talent will reap benefits for these organizations for years to come. Terry’s loyalty to his profession and the community was recognized through various honors including the University of Illinois’ Honorary Varsity “I” for his activities with the Illini Striders and service to University of Illinois Track and Field Program, and the Association of Fundraising Professonals’ Outstanding Fund Raising Executive Award. Terry’s family and friends will remember his generosity and his straight-talk honest advice, infused with an excellent sense of humor, and unreserved hearty laughter. Perhaps his greatest joy in life was making others happy, especially his best friend and wife, Judy. He succeeded in this endeavor and his genuine friendship will be unmatched for many. The family will plan a celebration of life at a later date which will hopefully commence another winning season for the St. Louis Cardinals.
To plant a tree in memory of Terry Rathgeber, please visit Tribute Store
Services for Terry Rathgeber
There are no events scheduled. You can still show your support by planting a tree in memory of Terry Rathgeber.
Visit the Tribute Store
Plant a Tree
Print
Share A Memory
Plant a Tree