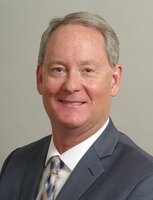 Mark Daniel Blackburn, 55, of Galesburg, formerly of Carlinville, passed away January 13th 2023 @ OSF St. FrancisHospital in Peoria. Mark was born on March 9th, 1967 to Lennis and Jean (Willis) Blackburn in Springfield IL. He was happily married to Tami Shreves. Mark graduated from Carlinville High School in 1985. Mark earned a Bachelor’s Degree in Business Management from the University of Illinois - Springfield and a Master of Business Administration degree with a concentration in Finance from Saint Louis University. Mark had been with First Mid since 1994. He had 30 years of commercial lending experience and was Director of Healthcare Financing for First Mid. In addition to serving as Community President of the Galesburg and Knoxville bank offices of First Mid, he had 27 years of commercial lending service to the Galesburg and surrounding communities. For nearly 30 years, Mark has been active in the community in numerous executive leadership roles. He has served as Chairman of the Board of Trustees of Galesburg Cottage Hospital, Chairman of the Board of Directors of Bridgeway, Inc., Chairman of the Board of Directors of GREDA, Chairman of the Board of Directors of the Knox County Civic Center Authority and in Board member leadership roles in many other organizations. Mark was a man of God and a friend to everyone. He was very much involved within his community and always would lend a helping hand. He loved to travel..his favorite trips were vacations with his wife and ATV rides in West Virginia. He was an avid hunter and loved the outdoors. If you ever took a ride with Mark, you were only going to hear Elvis tunes as his love for him began when he was a child. The most important part of Mark's life was his family. His grandkids were the apples of his eye. Mark is survived by his wife, Tami Blackburn of Galesburg, IL; 5 children, Lauren (Jordan) Blackburn-Williams of O’Fallon, IL, Holly Blackburn of O’Fallon, IL, Buddy (Jessie) Herron of Knoxville, IL, Savannah (Steven) Sopher of Abingdon, IL, and Haylee Sopher of Warner Robins, GA; 7 grandchildren, AJ, Ava, Aria, Lane, Jade, Penelope, and Jettson; sister, Becky Whitler of Carlinville; sister-in-law, Allynn Walker; 2 nieces, Michellle (Jeff) Walter and Laura (Tim) McNeill; 2 nephews, Luke (Rebecca) Blackburn and Greg (Danlee) Whitler. Mark was preceded in death by his parents and brother, David Blackburn. Visitation will be held on Wednesday, January 18th at 10 am at Carlinville First Assembly of God Church. Funeral to follow at 11 am with Rev. Phil Schneider and Rev. Allynn Walker officiating. Private burial to follow in Mayfield Memorial Park Cemetery in Carlinville. Memorials suggested to Carlinville First Church. Davis-Anderson Funeral Home in Carlinville is in charge of arrangements. Online condolences can be given at www.davisandersonfuneralhome.com.