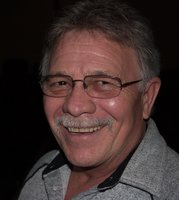 James Richard "Dick" Neunaber, 70, of Carlinville, passed away Saturday, January 2, 2021 at his residence in Carlinville, IL. Dick was born on February 18, 1950 to Millard Martin "Cap" and Anna Louise (Green) Neunaber in Carlinville, IL. He graduated from Carlinville High School with the class of 1969. Dick worked as a mine examiner for Monterey Coal Mine in Carlinville, retiring after 35 years. He worked at Ketring's prior to his employment at the mine. Dick was a member of Ss Mary and Joseph Catholic Church, Macoupin Club in Carlinville, and UMWA. He also served as past president of the Aqua Club in Carlinville. Dick enjoyed riding motorcycles, hunting, fishing, and his social life with his friends. Dick is survived by two sons, Eric Neunaber of St. Charles, MO, and Bradley (Susan) Neunaber of Jerseyville, IL; grandchildren, Riley, Olivia, Evelyn and Mason Neunaber; brother, Tom (Nancy) Neunaber of Carlinville, IL; sister, Linda (Ted) Walton of Carlinville, IL, as well as several nieces and nephews. Dick was preceded in death by his parents. Graveside services will be held on Friday, January 8, 2021 at 1:00 pm in the Carlinville City Cemetery. Memorials are suggested to the Macoupin Club or ABATE of Illinois. Online condolences can be given at www.davisandersonfuneralhome.com Davis-Anderson Funeral Home, Carlinville is in charge of arrangements.